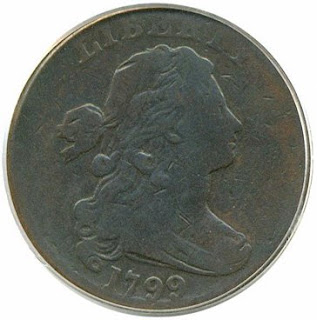 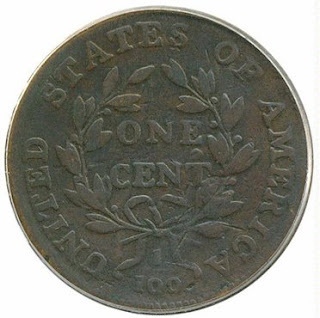 The inspiration for this posting comes from the latest addition to my collection of early cents. This humble copper coin, dated 1799 marks the end of my 3-year-long quest to upgrade this date. It is a coin that anyone with familiarity in this series can appreciate, both for its simple beauty, and for its outstanding rarity (in nice condition).

This is not my first 1799 - actually, it is the 5th one I have owned. What sets this coin apart from all the others (besides the price, which was considerable) is:
1. The quality of the planchet - smooth medium chocolate brown. The sort of surfaces that are normal on any cent from the 20th century, but not at all common in the 18th century, and decidedly scarce in 1799.
2. The strong date - as a large cent specialist will tell you, with a 1799 Sheldon-189, you generally get your choice of a "strong date" or a strong LIBERTY". The axial misalignment of the dies generally assured that no coins were stuck that year with BOTH the date & the word LIBERTY strong. This coin has an exceptionally strong date and correspondingly weak LIBERTY. I prefer this to the alternative.
3. The REV die chip. Not every 1799 Sheldon-189 exhibits the triangular shaped die-chip on the reverse, between the words ONE & CENT. At some point in the REV die's life, this chip was ejected from the steel die, and all subsequently-made coins show this small die chip. It is one of the "hallmarks" of a genuine 1799 (some coins also show some die crumbling at the dentilation on the rim between the word "OF" and the word "AMERICA". This coin does not show the rim crumbling well, but it is often visible on late-state coins).

There are just two varieties of 1799 American large cents available to collectors, and both of them are very scarce. The famous overdate (S188) is R4 (with an estimated extant population of less than 200 coins), while the normal date (S189) is R2 (with a total population estimate of 600 to 2000 coins).

A genuine 1799 cent (any variety, in any condition) represents the Mt. Everest of most large cent collections. Among all early-date (1793-1814) large cents, there are other particular varieties that are more rare (for example, the 1794 S15). However, if one is building a large cent date collection, there are common varieties available for almost every date (including 1794). The glaring exceptions are 1799 & 1804. 1804 cents are scarce. The things that differentiate 1804 and 1799 (in my opinion) are the quality of the copper and the quality of the strike. An 1804 cent has a good chance of being struck on an average (or better) planchet, while a 1799 most likely will have poor surface quality. Likewise, an 1804 cent will have a high probability of being well struck, while a 1799 has only a 50/50 chance (at best) of a decent strike.

When it comes to 1799 large cents, there are a lot more frogs to kiss than handsome princes!

I am not done collecting large cents. I may (one day) obtain a rarer coin than this one. I also might one day buy a coin that costs more than this one. However, this coin has done two things for me, simultaneously:
> It has enabled me to complete my large cent date set, with every coin in reasonable condition.
> It has enabled me to say I am now a "serious collector" (by current $ standards).
Posted by Sheldon-48 at 9:00 PM No comments: