The recently-completed sale of the Dan Holmes early-date large cents (1793-1814) garnered so much attention, and set so many price records (including the highest price ever recorded for an American Large Cent, at $1.265 million, and the most valuable large cent collection ever sold at auction, $15.17 million) it might be hard to believe that anyone could find a bargain at this sale. Yet, believe it or not, some of the coins sold in this auction were legitimate bargains!
Prices overall for the Holmes early-date cents were very strong. In general, the headline rarities and coins in very high condition (strictly mint-state & high in the condition census) often exceeded pre-sale estimates by a wide margin. Meanwhile the NC (non-collectible) varieties and the scarce varieties in lower grades realized weak prices. However, there were many exceptions, so it is impossible to make sweeping statements with complete accuracy.

Below I will discuss about a dozen coins from the Holmes sale that I consider (with the benefit of my 20:20 hindsight) were great values for the winning bidders:

5. LOT 236 was the unique (R8+) 1797 NC-8 stemless wreath cent in VF20+. While the hammer price of $32,000 accurately reflects the current market value of the coin, I believe the future will be bright for this problem-free high quality RARE large cent, unless more examples are discovered.

7. LOT 302 was a 1798 S-164 (R4) in F12. There was nothing particularly noteworthy about the coin. I chose to highlight this coin because it was one of the few low-priced bargains in this sale. Most of the Holmes coins worth under $1000 got bid well beyond their book value; probably by people seeking the Holmes provenance for one of their coins. This coin sold for just $340 - far less than the value of $750 listed for the coin in CQR.

That wraps up my bargain hunt for the Dan Holmes early date sale. I doubt that everyone who reads this will agree with all my choices of bargains. In many cases only time will tell if the coins were, in fact true bargains. Every winning bid made sense to at least one person at the time! Sadly, I was not the winning bidder for any of the coins I just described. I did, however, take home the 1797 Sheldon-130 from the sale (pictured below), and even though I would not call it a bargain, it has found an appreciative new home right here. THANKS a million, Dan! 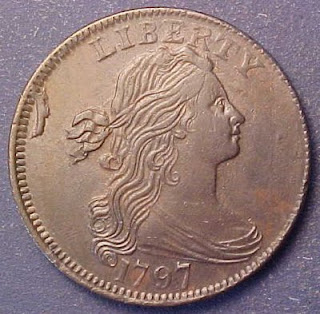