Introduction
Coins with problems can be a painful subject to discuss. Collectors generally seek problem-free coins for their collections. Most literature on the subject of coin collecting or investing in coins emphasizes the need to avoid coins with problems. However, in the "real world", it is inevitable that a collector will encounter coins that are desirable additions to the collection in spite of a problem. Another "real world" situation involves the uninformed acquisition of a problem coin - the problem is revealed by submission to a grading service, or exhibition to a more experienced coin collector. Such real world experiences force collectors to consider the nature of problems with early copper coins, and their own personal reaction to coins with problems.

What is the problem ?
With luck, this question can be asked and answered before the coin has been acquired. This is because a problem will impact the value of any coin. Therefore, it is critical to understand the nature and the severity of the problem to either avoid purchasing the problem coin (if that is the preferred solution), or negotiate a fair price for the coin with its problem. The list of problems that can impact early copper coins is long. A small sample includes: cleaning, scratches, surface damage, rim bumps, corrosion, tooling (and/or alteration), planchet flaws, and bends (or various combinations of these problems). Coins with counter-stamps might be considered problem coins by some collectors, but for others, the counter-stamp is the object of their pursuit.

What is the impact of the problem ?
Generally speaking, the impact of any problem depends on both the severity of the problem and the sharpness grade of the coin. Lower grade coins are expected to have more issues, like rim bumps or scratches, due to the amount of time they spent in circulation. Conversely, higher grade coins are expected to have more eye appeal, so problems that might seem minor on low-grade coins become major issues on high-grade coins.
For many collectors, the discovery of any problem is the "end of the discussion" for that coin - They simply do not want a problem coin. There is nothing wrong with this attitude. This approach will result in a collection of high-quality coins, regardless of their technical grade. However, it requires patience and discipline, in order to wait for just the "right" coin for the date or variety that is being sought. In the meantime, prices can go up dramatically.
For other collectors, a coin with a problem represents an "opportunity" to negotiate a better price, and/or a chance to acquire a specimen with good sharpness (ie. little actual wear), but with impairments. I call this strategy "bargain hunting". The problem with this approach becomes evident when the coin is sold, or as the collector "matures" in his or her area of focus. Once the same variety has been seen in "choice" (problem-free) condition, it can be difficult to live with the problem coin (at least, that has been my experience). The problem will not magically "go away", and when it is time to sell, potential buyers expect to get a bargain price for the coin. This will limit the potential financial gain from ownership. Naturally, not all collectors insist on making a profit from their hobby.
I now believe a pragmatic approach is the best way to consider coins with problems. I still advocate the acquisition of problem-free coins whenever possible. However, for truly rare coins or hard-to-find varieties, this can involve such a long wait or large expenditure that it makes sense to consider a "problem" coin. Every collector must know enough about his/her personal preferences to know what kinds of problems are tolerable. It is also important to recognize the personal reasons for collecting coins: What defines completion for the collection? Is the collection also an investment? What aspect of a coin provides the most pleasure - its rarity, its beauty, the knowledge of past ownership (ie. provenance), or the unique attributes of the die variety (or die state)? How does a problem impact the enjoyment of the coin? For me personally, the potential financial impact of the problem is a factor in my decision to acquire a problem coin.

My Personal Journey
During my early days of copper collecting, I was a "bargain hunter". I practiced the art of deal making, and soon found that I could negotiate a deeper discount for coins that had problems. My collecting goal was fairly clear - I wanted a complete date set of large cents. However, my copper grading skills were those of a novice, and virtually all of the coins I wanted to buy were "raw" coins (ie. not graded & encapsulated by any grading service). The entire concept of "slabbing" (grading & encapsulation) was in its infancy at the time.
After a few years of pursuing early copper, my understanding and appreciation of the large cent series had grown to the point where many of my earlier acquisitions were no longer satisfying to own. I began to develop a preference for "choice" copper. I also got a sense for the problems that I could live with (cleaned & nicely retoned coins, short scratches) vs. the problems that drove me crazy (rim bumps, uneven corrosion). Having achieved my early goal of a large cent date set, I expanded my goal to include major large cent die varieties (ie. Red Book varieties).
I eventually reached the point where I decided that bargain hunting was futile. I became a "condition fanatic", who avoided anything with a hint of a problem. However, two interesting complications arose from this approach: 1. I could not acquire coins for my collection at the desired rate (at least one coin a month). 2. The competition for "choice" copper was fierce, and the prices were always higher than the guide (often a lot higher). I have now softened my stance a little on condition, in search of the "balance" I need to be a happy collector. I have decided happiness is my ultimate goal!
There have been times in my numismatic career when the value represented by a coin with a problem is too compelling for me to resist. To cite one example, I recently saw an 1803 S265 (Large Date, Large Fraction) in an auction. The coin had very nice sharpness, smooth hard surfaces, and original chocolate brown color, but a few obvious scratches on the obverse (see photo). 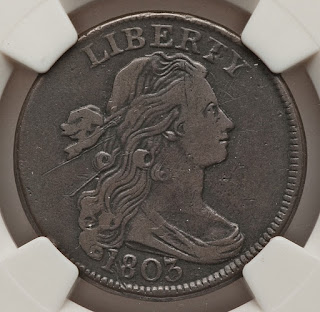 This coin represented a variety on my "wish list" for over 3 years. After carefully studying the images of this coin, I concluded that I could live with the problem, if I could get the right price. A coin in this sharpness grade with minimal problems would cost from $2000 to $3000. When I got this coin for under $700, I was very satisfied. I still own the coin, and I plan to hold it for a long time. I know it is not a coin that everyone can love, but it works for me!
Happy Hunting!
Posted by Sheldon-48 at 1:35 PM 1 comment: